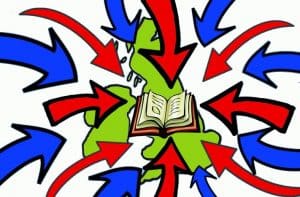 In 1887, Polish writer Dr LL Zamenhof invented a language which he hoped would bring people and nations together under a common flag of communication and understanding, taking elements from different European languages to create one language with a standardised set of rules and no irregular forms to learn. It was primarily Latin based, with lesser parts of French, Slavic and German, and in theory is much easier and more logical than any other language. Unfortunately, the language never fully caught on, and today it is spoken by only 2 million people.
However, although Esperanto may not have been the success Zamenhof envisioned, another language has seemingly filled that role: English.
Of all the languages in the world, English is only outnumbered in terms of its 335 million native speakers by Mandarin Chinese (1,030 million) and Spanish (414 million). However, when the number of people who speak English as a second language is included, the number rises to 840 million English speakers. Furthermore, English is spoken in 94 different countries as an official language, as opposed to French (29), Spanish (21) and Chinese (3).
So what made English the language it is today, and how did it become so widespread?
It could be said that English began to take shape when the Romans left Britain in 410AD. With the departure of the Romans, the language of English was a uniquely British language known as Celtic. But it was about to be added to and expanded considerably over the following years. With the arrival of the Angles and Saxons from the north of Europe, Anglo-Saxon was born. This is the source of many household English words today.
In 597AD, Christian missionaries arrived, bringing with them the Latin that gives English many of its words related to religion. The Vikings then came, giving a Nordic element to the language, followed by the Normans in 1066, who incorporated the French language which would become the de jure language over the next three centuries, especially influencing the language of law and cuisine.
By the end of the fourteenth century, the language of the common Englishman was a language that was composed of these many different influences, while French was the language of the nobility. In 1400, Chaucer wrote his magnum opus The Canterbury Tales, using the vernacular English for his poetry. This brought the sleeping mongrel of the common English language to life, and from that time, it was to become the language that would conquer the world.
William Shakespeare was a great influence in the sixteenth century, showing that English possessed a richness, vibrance and beauty that was to be admired. It is argued that Shakespeare himself added 2,000 words to the English vocabulary.
In 1611, the King James Bible was printed in English instead of Latin. Later in the seventeenth century, some of the world’s great scientists, such as Hooke, Boyle and Newton decided that as they were all English, they should speak to each other and write in English, rather than the Latin in which scientific documents had been written up to that point.
English was now the language of poets like Shakespeare, scientists like Newton, even God himself. It had grown up.
Now it was ready to leave home, and on the back of British imperialism, it did so. It went on many long journeys and brought back many linguistic souvenirs to add to its richness: the Americas – where English was influenced by the languages of native Americans, fellow settlers the Dutch, Germans and Italians – the Caribbean (1600s – 1700s); India, Africa, Australia, China (1800s).
All these languages and contacts naturally combined to make English the linguistic blend that Zamenhof had tried to achieve, and today it is the international language of business, aviation, science, technology, education, politics and entertainment.
English unites and opens up the world to anyone who speaks it.  That is why international schools are such an important part of the modern world, and why being able to speak English fluently multiplies greatly the number of social, personal and career opportunities  available to new generations.

Author Info
John is the Middle School Coordinator for the English Curriculum. His favourite writers are Shakespeare, Dickens and the students in his English classes.