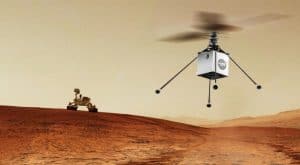 By Alessandro and Vivian

By 2020, Nasa will send a new rover to Mars, which will take with it a tiny helicopter capable of flying on Mars’s surface. Nasa’s scientists took four years to get it ready, and by February 2021 it will have arrived on the red planet.

This rotorcraft  weighs only 1.8 kilogrammes and is around the size of a softball. Its blades will spin about 10 times faster than ordinary helicopters on earth. This helicopter is the first aircraft that can fly off a planet with its own thrust.

Mars is several light minutes away (55 million km) from planet Earth,;this means that no remote signal can reach the vehicle so it “flies the mission on its own”.

“The idea of a helicopter flying the skies of another planet is thrilling,” said Nasa Administrator Jim Bridenstine.

This mission was particularly difficult because Mars’s atmosphere is 100 times thinner than Earth’s. This gravity difference explains why 40 000 feet on Mars are equivalent to 100 000 feet on Earth.

This invention is a more efficient way of observing the surface of Mars, because many wheeled rovers have got stuck in the sand.