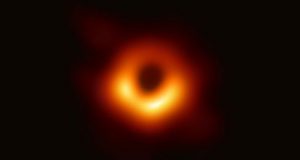 The first ever picture of a black hole was released on April 10 by an international telescope team. The black hole is located about 55 million light-years from Earth in the centre of galaxy M87.

It is the first black hole whose mass has been calculated by three precise methods: measuring the motion of stars, the swirl of surrounding gases and now – thanks to the Event Horizon Telescope imaging project – the diameter of the black hole’s shadow.

The size of the shadow also negated the idea that the black hole is a wormhole, a theoretical bridge between distant points in spacetime. If M87’s black hole had been a wormhole, theory predicts it should look smaller than it does.

Two other black holes whose masses have been measured in multiple ways, also suggest the star method works better. “These three cases now offer renewed faith in our current method,” Natarajan says. “What we don’t know is how we get supermassive black holes within a billion years,” says Hannalore Gerling-Dunsmore, a former Caltech physicist.