On 15th May, in the Olympic Stadium, Lazio beat Atalanta 2-0 to win the Coppa Italia, with goals from Sergej Milinkovic Savic and Joaquin Correa.

In the first half, both Atalanta and Lazio managed to get near the opposition goal, although they did not score. The match had a breakthrough ten minutes before the end, when Simone Inzaghi removed brought on Milinkovic Savic in place of Luis Alberto who scored a headed goal. Atalanta tried to score but could not get past the Lazio wall of defence. In the 90th minute, Correa dodged Freuler and scored another goal that signalled the Bergamo team’s defeat.

“It’s a shame, but these finals are like this. In the first half, we wanted to play with all of our energy but in the second half we did not play very well. We suffered from the quality of the Lazio team and let’s not forget that it is a strong team. We wanted to change the situation in the second half, but we did not manage to,” said Atalanta manager Gian Piero Gasperini.

“It has been a wonderful evening in front of an amazing public. We played a great game, however. Credit to Atalanta, who also played very well. It was fought how the championship was fought. Milinkovic and Caicedo were great when they entered. It’s satisfaction that we deserved,”  said Simone Inzaghi.

In conclusion, it was a fairly fought game that ended with Lazio’s deserved victory. 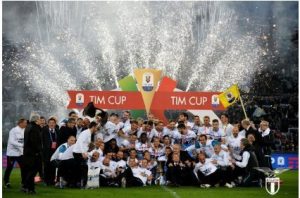