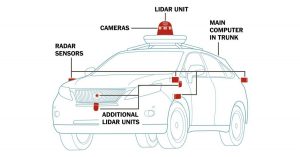 The idea of self-driving cars has been around for many years, but only recently are we getting closer to actually having them on roads. A few companies that have the funds and technology necessary, like Google (Waymo) and Tesla, are competing to win over the self-driving car market.

To function properly, autonomous vehicles use radars, cameras and a lidar (which create a map of the world around it through millions of light pulses and by measuring how long they take to come back) to ‘see’ objects around them, in order to avoid obstacles.
However, these vehicles and the companies that promote them, got heavily criticised for not being safe and for relying on lidar and other devices solely to travel, putting many people in danger.

Tesla’s CEO, Elon Musk, stated that by the middle of 2020, Tesla’s autonomous system will have improved to the point where drivers will not have to pay attention to the road. In fact, a study of vehicle incident reports in California, found that humans were the ones to blame in the majority of accidents that occurred involving autonomous vehicles. From 2014 through 2018, when the self-driving cars were in autonomous mode and driving on their own, 38 incidents occurred. In all but one of those cases, the accidents were caused by humans.