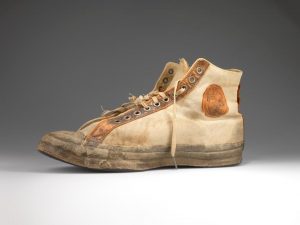 Almost all of us know what a pair of Converse is and what it  looks like. But what’s the history behind it?

The Converse sneakers’ history began in 1908. The company, at the start, was specialised in making rubber shoes, like rain boots.  ‘Converse Rubber Shoe Company’ (the original name), started  designing athletic shoes – mostly basketball – to gain more money and popularity.  In fact, they invested a great amount of money by designing the ‘All Stars’ sneakers, that had its first success in 1917.

Although basketball wasn’t as popular back then, Converse survived, and most NBA players wore them by the year of the league’s debut season, in 1949.

Since the first design of the shoe was released, the company has made very few changes to its original; using some different materials and colours, and increasing comfort, but overall the design hasn’t really changed.

After  a few decades, as other companies started releasing newer and more functional designs for sports,  converse shoes lost their popularity in that department but managed to keep their popularity as a ‘lifestyle’ shoe.

In conclusion, Converse shoes have had an important role in the shoe history because of the innovation and simplicity they brought in sports (at the start) and in our everyday life.

Rain, rain, go away!! All our students want to play!!