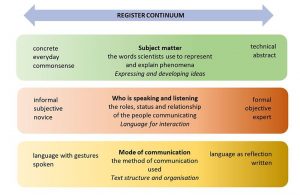 English as an additional language is something all our students receive at Acorn House. In the process of delivering it, teachers almost need to learn another dialect that exists within their own mother-tongue language, made up of buzzwords, argots (a charmingly esoteric word in itself), acronyms and initialism that describe the shades of grey that exist in language acquisition.

The Register Continuum, BICS and CALP

The register continuum is a scale which defines varied levels of formality in written and spoken language, depending on register, which itself is influenced or defined by social context. The most basic level of communication that students will learn is known as BICS (Basic International Communication Skills), which is essentially the most simplistic communication, often supported with gestures, that a student will learn at the start of their study of a language. The uppermost part of the register continuum is CALP (Cognitive Academic Language Proficiency), which is what students writing university dissertations or theses should be consciously using.

New students of EAL working towards BICS may not give any easily measurable indication of how much they understand in class, because it is natural for them to go through a silent phase while they internalise their understanding in their own time. It is important that students are allowed to develop their language in a low anxiety environment, and are supported with visual aids. Because of this, teachers and parents should not be concerned if children do not participate in lessons in the earliest stages of their new language acquisition.

Shortly after BICS, surface oral fluency should be achievable within two years, but full fluency takes up to seven years to achieve. Obviously “full fluency” is a relative term that refers to fluency within the context of the individual, and CALPS can only really be achieved by older users, as it requires a sophistication of language that young people would find almost impossible to achieve even in their first language.

At the higher end of the scale, which would usually be more relevant to high school and university  students, the use of passive voice, lexical verbs and nominalisation are used to raise written work and oral presentations to a level of higher academic proficiency and elegance. Although considered high-end language skills, the use of passive voice and lexical verbs (as opposed to phrasal verbs) to give writing a formal or academic tone is taught to our students from the early middle school years. Students are expected to vary their register depending on the purpose of the words they choose.

Nominalisation, taught in Year 9, is the creation of a formal tone that educated native speakers do naturally, but which must be learnt consciously by non-native speakers. It involves the transformation of verbs into abstract nouns, supported with more complex verbs to give writing or speech a neutral and authoritative tone. When speaking more informally, concrete nouns are more common. For example, nominalisation can be used to make the following sentence more formal:

He thanked the students for turning up. (informal)

His gratitude was conveyed to the students for their attendance. (formal)

Here, gratitude is an abstract noun, while conveyed is more sophisticated a verb. The phrasal verb has also been changed to a lexical verb.

The passive voice also lends an air of neutrality. However, the idea that the passive voice should prevail over the active voice in scientific writing is, in part, something of a myth: indeed, scientific papers written after a series of investigations tend to employ active constructions far more than passive. However, the description of the process of an experiment – which would be the most common usage for Acorn House students – does require the passive to remove the scientist’s human presence when the presence of facts is what matters.

By the time Acorn House students reach middle school – provided they have been with us from the outset – they are ready to develop their English towards the CALP end of the continuum. As well as learning to improve their writing and speaking with the previously mentioned tools, our students have to be made aware of common mistakes that can hold them back. Learners are often guilty of doubling the subject, incorrect inflexion of third person singular, incorrect pluralisation, misplaced or forgotten punctuation, incorrect word order, and comma splicing.

These are fairly typical of Italian students, as they represent direct translations from Italian into English, or adoption of the Italian writing style, which is subtly different to that of English.

This is how comma splicing is explained. Comma splicing is when a run-on sentence is made by separating two independent clauses with a comma. In English, independent clauses can almost never be separated with anything other than a full stop, a semi-colon, a colon or a conjunction. However, in Italian a comma is permitted, allowing the writer to create the seemingly endless flowing sentences so much admired in Italian writing. Students are simply applying accepted Italian punctuation to English writing. It is an understandable mistake, but stands out in the (very relatively) staccato structure of English.

The incorrect inflexion of the third person singular verb, where an s is added to regular verbs seems to be a peculiarly anomalous sticking point for Italian students. London’s EAL Academy points out that in Danish there is no change to the base verb when conjugating in the present tense, yet Danes have no trouble conjugating English verbs. The problem of not adding the s is surprisingly common with speakers of Romance languages (and also with Chinese learners), who seem to have an as-yet unexplained aversion to it. This assertion is supported by my own empirical evidence while working with Italian students at Acorn House. Students have to often be reminded to add the s to third person singular forms, even though they already know full well that they should. One student’s mother even told me that when she pointed this out to her son, he said he didn’t add the s because “…even though he knows it’s right, he doesn’t like the look of it”.

To reach CALP, the key is to read in English as much as possible, and in as wide a variety of texts as possible. Acorn House students travel a long way across the register continuum in their nine years at the school. This is evidenced by the exams they take alongside high school students in year eight, and the fact that in Year 9 they work at a level of Cambridge English that doesn’t even have a “for schools” version because it is a level that certifies the learner able to do the following:

It’s a long EAL journey from the BICS of early years to the CALP of Year 9, fraught with many linguistic pitfalls and cultural nuances, but it’s a journey well worth making.

Author Info
John is the Middle School Coordinator for the English Curriculum.