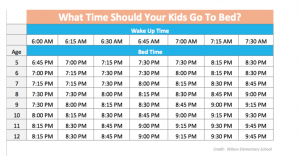 The importance of sleep is often de-emphasized in today’s society and being able to function on less sleep seen as a strength, but relatively new research shows the adverse effects of sleep deprivation can be long term and near irreversible. Not only for us, but our children too.

Guidance on the amount of sleep a child needs is plentiful on the internet and from some reliable resources too.

The American Academy of Pediatrics’, which uses broader age groups, says that kids ages 3-5 should get 10-13 hours of sleep whereas kids 6-12 are OK with 9-12.

Wilson’s Elementary chart goes even further to state the bedtime in relation to the wake up time according to age. 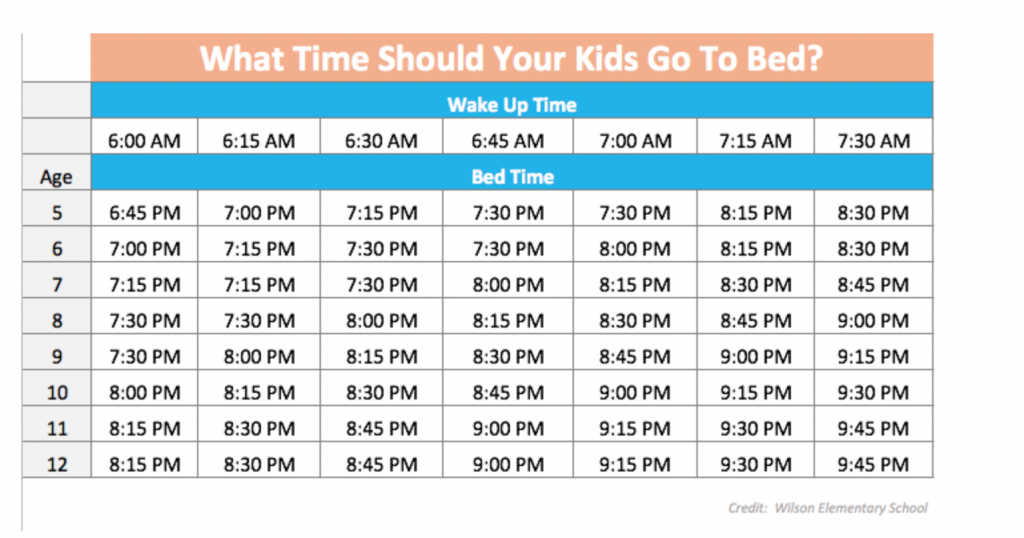 Which begs the question: if guidance on sleep for children is readily available at a click of a button, why do we have a generation of children who get an average of one hour less sleep than they did just 30 years ago?* Why aren’t children getting enough sleep?

Nowadays, it’s quite socially acceptable to give children iPads and smartphones to keep them occupied, children spend on average around 17 hours a week in front of a screen – almost double the 8.8 weekly hours spent playing outside.** Screen time takes a lot of children right up until bedtime, meaning late-in-the-day exposure to artificial blue light. The blue light that is emitted from these devices slows down the body’s production of the sleep hormone melatonin, making it more difficult to nod off. The fact that the UK has seen prescriptions of melatonin increase, not just for adults but children too, is not coincidental.

Over-scheduling is another reason children aren’t getting enough sleep. Whether it be homework, sports, music, other extracurricular activities, social lives; a life of a child is jam-packed. Meaning an hour of sleep is the first thing to get knocked off the priority list. But isn’t this the trade off for a child with 3 languages, 2 musical instruments and a sport under his belt? Will an hour less shut eye really have detrimental effects on his health?

According to sleep expert Avi Sadeh of Tel Aviv University, the answer is yes, “getting just one hour less of sleep each night affects student performance by a whopping two grade levels. In other words, a sleepy third-grader will perform at the level of a first-grader.”

In the short term, lack of sleep can unfold in some telling ways such as constant yawning, bags/dark circles under the eyes, lacking interest, alertness, motivation and a short attention span. But lack of sleep can also have some unexpected effects too, such as hyperactivity, lack of impulse control, difficulty regulating emotions and aggression,  which are also symptoms linked to behavioral disorders including Attention Deficit Hyperactivity Disorder (ADHD). Notably, “lack of sleep does not cause ADHD…(but) can cause behavior that is virtually indistinguishable from it.’ says Diamond, a child development specialist.

The National Sleep Foundation believe little sleep has a closer connection to ADHD, stating “Poor or inadequate sleep can lead to mood swings, behavioral problems such as ADHD and cognitive problems that impact on their ability to learn in school.”

Making a convincing argument for the notion of sleep deprivation having long term effects on a child’s health is from a project called Project Viva. Lead by Dr. Taveras, who is chief of general pediatrics at Massachusetts General Hospital for Children in Boston.

Data was collected from 1,046 children from birth until 7 years old, every year, using a health questionnaire filled in by the mother.  At 7 years of age the child was scored based on executive function; the brain’s ability to process and respond to information as well as behaviour. Interestingly enough, both mothers and teachers were asked to score, only adding to the validity of the study.

The findings showed that children categorised as having ‘insufficient sleep’ during the years 3 to 4 years and 5 to 7 scored lower at the age of 7, compared to children who got sufficient sleep in early years.

In summary, Reuters Health says “Parents and teachers reported more problems in 7-year-olds who didn’t get enough sleep during their toddler and preschool years, compared to peers who got an age-appropriate amount of sleep during those early years.”

Echoing these findings is Michael Farquhar, a consultant in sleep medicine at the Evelina Children’s hospital, who said “I describe sleep as like getting an MOT every night for your brain and body and, if you miss that for weeks or months, you won’t fall to bits but the longer you leave it the more problems it causes.”

With clearly no health benefits to having less sleep, how can we ensure our children get what they need and above all – catch up on lost sleep?

“Sleep debt—the difference between the amount of sleep that you need and the amount that you’re actually getting.”***

Go-to solutions to “repaying” sleep debt may include lie-ins and napping however Sleep.org argues that lie-ins will help you feel re-energised, but ‘your ability to focus’ will still be reduced. Napping is only a short-term solution, which could in turn actually impact negatively on your circadian rhythm. The only sustainable solution? Getting enough slumber during the night. This isn’t an easy feat as resuming a healthy sleep pattern can take weeks, below are some tried and tested tips to sound sleep.

A final thought from E. Juulia Paavonen, M.D., Ph.D. University of Helsinki, who puts things into perspective “sleep promotes well-being, learning, social relationships and development in many, many ways. It’s the cheapest and maybe also the easiest investment that parents can make towards their child’s healthy development.”

Even if the importance of sleep cannot be stressed enough, it is understandable that factors that influence choosing bedtime may also be social, cultural and familial. For example, an ideal bedtime for your little one might be 7.15pm, but this means not seeing daddy, home from work at 8pm every weekday night. The decision needs to be made; is daddy time worth the hour less of sleep? There’s no right or wrong answer to this, but I believe being flexible and listening to the needs of your child will lead you to a decision that, in turn, will let you, your child  and your conscience sleep well at night.

The end of Year 3's Topic lessons on the Romans!