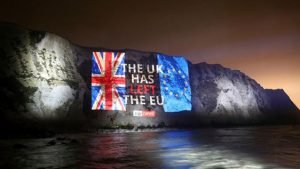 Brexit has now happened. The UK left the EU on the 31st of January after 47 years of membership. The British citizens celebrated with a Brexit countdown projected on the front of 10, Downing Street, official residence of the British prime minister. The EU president David Sassoli attended an interview with CNN saying that it is a major blow for all the EU but that the “friendly relations” with the UK will continue.

The UK will continue following EU laws for an 11 month transition period but a new agreement has to be found to avoid the UK exiting without a deal. This period will give time to negotiate and to find an agreement for UK goods to move in the EU. If a new agreement can’t be found it could mean taxing UK goods coming into the EU.  “Well, it’s a very complicated agreement … after 47 years, and more, of cooperation, we have to bear that in mind when we look at the future relationship, it’s very intensive work that we have to do. I don’t think that anybody could think we could do that in a couple of months,” the EU president said. He also added that we have to accept the British citizens’ decision and that the agreement will mark a new beginning. “We will defend our interests and protect our European identity, but we will always act with a sense of brotherhood to our British friends,” he continued in the interview. He finished by saying that there are no hard feelings about the UK negotiating with the US.