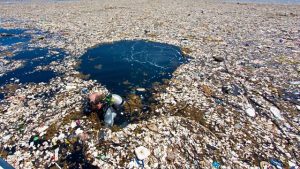 Nowadays plastic is a key element of our life. We use it for everything, in packaging our food,  making clothes, pens, nearly everything!

When we use it, however,  we don’t think of where it will go, if it will be recycled or the problems it can cause in marine habitats. Oceans are becoming full of plastic, and islands,  made entirely from plastic, are forming and damaging marine flora and fauna.

To try and save the marine habitat of the planet lots of companies are trying to help. One of the most prominent are: 4 Oceans – a for-profit company founded in Boca Raton, Florida in 2017. It is a company that acts worldwide trying to protect, as the name suggests, the 4 oceans on our planet.

Around the world at this moment, there are 6 massive islands that are polluting our oceans. For example, there is an island named “Pacific Trash Vortex”. It’s dimensions are still not precise, but explorers say it can be from a minimum of 700.000 km2 to 10 million km2. It contains nearly 3 tons of rubbish.

Another gigantic island named “South Pacific Garbage Patch” has been recently discovered off the coast of Chile and Perù by Captain Charles Moore and his team, the same team which in 1977 discovered “Plastica Trash Vortex”.  Its area is of 2,6 km2 and it contains micro fragments

The “North Atlantic Garbage Patch” is an island discovered in 1972 and it is the second biggest rubbish island regarding land mass. Estimates predict that it’s dimensions are of nearly 4milion km2. It has moved along the North Atlantic oceanic current. The mind blowing fact is the density of the rubbish in this isle – 200.000 rubbish fragments for every km2.

The “South Atlantic Garbage Patch” is the smallest of all these isles. It’s size are 1milion km2 and it is moved by the South Atlantic oceanic current. It is situated between South America and South Africa.

“The Indian Ocean Garbage Patch”, has dimensions of 2 milion km2 with a density of 10 thousand pieces of rubbish per km2. It had been discovered in 2010, however, that it has existed since 1988, according to the american agency NOAA (National Oceanic and Atmospheric Administration).

The last island is “The Arctic Garbage Patch” , it is the smallest because it is still forming. It had been discovered in the sea of Barents near the Arctic Circle. It’s formation is due to the rubbish from the European and North American seas and after a long time arrived near the arctic circle and formed the island. A concerning fact, discovered from a project in 2013, has found out that the seas are still not polluted by this island. This may happen in the future.

We are forgetting about these islands and the problems that they cause. We need to try and do something for our world, to change the way we pollute it, to protect our oceans, and save everything that lives, and thrives, within them.