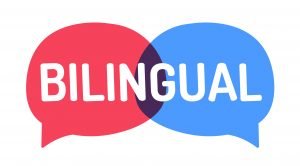 Monolingual children refer to those children who understand and speak only one language, whereas bilingual children understand and speak two languages. In particular, simultaneous bilinguals are children who have been exposed to two native languages since birth and early bilinguals are those who have been exposed to a second language (L2) within their first three years of age.
For a long period of time it has been thought that bilingualism led to delays in: language development, reading and writing, additionally to believing that knowing how to speak two or more languages would confuse the child. Instead, recent studies support the bilinguals’ cognitive flexibility hypothesis. As a matter of fact, code mixing and code switching, are frequently used by bilinguals, depending on their interlocutor, in order to adapt to the environmental context (Lillo-Martin, 2014). Several studies have shown cognitive advantages in bilingual children; these benefits were found in tasks involving the use of executive functions, such as: cognitive flexibility, inhibition of response and working memory (Miyake et al., 2000). Sebastiàn-Gallés et al. (2012) underlined that knowing two or more languages has an early cognitive advantage. According to current studies, bilinguals, from a cognitive point of view, report having more resources and better metalinguistic, cultural and linguistic abilities compared to monolingual children.
Furthermore, on a social level, the biggest advantage of bilingualism is the possibility of being able to communicate with more people. With the advent of globalization, individuals become increasingly more subject to cultural exchanges with other countries.

In 2019 the university of Milano-Bicocca, in collaboration with the Acorn House International, conducted a research, aimed at investigating the effects produced by a double literacy (doppia alfabetizzazione) in language and reading skills, in 8-9 years old bilingual children, attending two Italian-English bilingual schools, and exposed to L2 before the age of three.
In particular, lexical, morpho-syntactic, reading, memory and narrative skills were investigated through the administration of two test batteries, one in Italian and one in English.
The two bilingual schools, Acorn House International in Rome and a school located in Lombardy, exclusively differed in the type of bilingual program for the first primary school class: the first school immediately uses the simultaneous method (50/50), whereas the second offers more English language exposure (75/35), and then passes to a 50/50 exposure in the following year. Another difference between the two schools is the exposure to the second language, which students received during their kindergarten years: the target population at Acorn House International had a monolingual exposure in L2 while the target population in the Lombardy school had a bilingual exposure.

The results obtained have confirmed the initial hypothesis, allowing us to affirm that the exposure to a double literacy does not produce any “penalty” in acquiring Italian in Year 4 (third grade classes of primary schools).
The statistical analyses carried out showed that the teaching program proposed by Acorn House during kindergarten and primary school years resulted in being more effective for the acquisition of a second language. In particular, in regards to the narrative, reading and morpho-syntactic skills, Acorn House’s target population obtained excellent results in both languages, exceptionally high in the English language compared to the other bilingual target population.
Furthermore, by using the normative data for English monolingual children, we found that Acorn House’s students are placed at the 82nd percentile for reading accuracy, at the 66th percentile for reading speed and at the 88th percentile for comprehension; these results respectively correspond to the score that English monolinguals obtain at the ages of 11:06, 10:02 and 12:05.