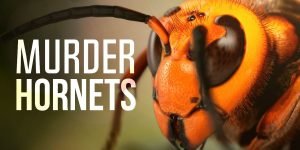 Murder Hornets
Murder hornets, also called Asian Giant hornets, are the largest species of hornets in the world, they measure about 1.5 to 2 cm in length. They are native to East Asia and Japan and mysteriously arrived in America in the year of 2020. They are becoming one of the biggest threats to the ecosystem because of their capability of slaughtering bee colonies in a matter of hours. They have a painful stinger and are able to spit a painful venom.

Where they came from
First discovered in Washington in December 2019, Asian giant hornets are an invasive species not native to the U.S and honey bees aren’t the only reason why they are called ‘Murder hornets’. These predators, native to East Asia and Japan, are infamous for slaughtering bee colonies, however where they came from still remains a mystery.
First nest of murder hornets found in Washington DC
Protected groups worked on destroying what supposedly is the first nest of murder hornets discovered in the United states, they wore thick protective suits and vacuumed the insects from the nest into large canisters. The state agriculture spent weeks searching for these hornets. They would use dental floss to tie tracking devices to the hornets to see where they were mainly located. The nest was found near the Canadian border and was about the size of a basketball. The scientist who found the nest estimated that the nest contained about 100 to 200 Queen hornets.

The Japanese strategy
Asian giant hornets are best known for their ability to decimate honey bee hives and kill a whole swarm in just a few seconds but what you don’t know is their great sensitivity to high temperatures. Although these murder hornets have been a major concern around Europe, in Asia, however, the bees have learned to fight back and have developed a technique called a ‘hot defensive bee ball’ to roast the hornets alive. This involves, surrounding the hornet and vibrating to produce hot temperatures and a thermal defence against the hornet.
American bees’ urgent help for Japanese defensive system
Unlike the Japanese honey bees, the bees in North america have no such defences. So if the murder hornets become established there, it could be a major problem for the bee population. Honey Bees are the most important pollinating insects in the world, so the extinction of this species would lead to devastating consequences. They’re vital for our environment because they transfer pollen to flowers and plants. This leads to pollen grains transfering from a male anther of a flower to the female stigma, which is an important way in which flowers reproduce.
Without them, we wouldn’t be able to breathe the oxygen released by plants, produced by the pollen transferred by bees.

Conclusion
In conclusion this had brought great stress in America and even the world! The loss of the honeybees would lead to multiple negative consequences which can include the death of human society. As a result America will try its best to make a balance between the bees and the hornets so the world’s ecosystem can survive.

The Bleaching of Our Coral Reefs