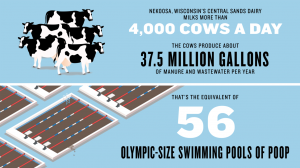 It has been proven that human activities have been affecting the whole world leading to climate change. It is thought that if we don’t take action immediately, extreme weather will be more frequent and sea levels will rise excessively because of the melting of glaciers. There will even be places on Earth too hot for people to live in and diseases will spread more easily around the world. This is the reason why it is crucial to understand the importance of climate change and use the time we have to do everything we can to stop it.

One of the biggest problems which we must face if we want to avoid extreme consequences is animal agriculture. It is not very well known that this activity actually contributes to the generation of more greenhouse gasses than burning Fossil Fuels do. It is in fact estimated that around 51% of greenhouse gasses come from agriculture, not the burning of fuel. Methane, for example, comes from cows and it is around 70 times more damaging than the carbon dioxide which is released in the air from cars and industries.

Another polluting element which is largely produced by animal agriculture is nitrous oxide. Emissions of it arise constantly from the massive amount of fertilizers which are used to grow the corn to feed animals. Unfortunately, these emissions are 200 times more damaging per ton than carbon dioxide is. Furthermore, animal agriculture is one of the main causes of deforestation and the extinction of species. The reason for this is that a huge amount of space is needed in order to keep animals and grow the food needed to feed them. Studies have even shown that this activity has a leading role in the pollution of oceans and water courses too since fertilizers eventually find their way to them making agriculture the number one source of ocean dead zones. It is thought that if we don’t take action on this massive problem, by 2048, we will see fishless oceans.

In 2018 the IPCC, Intergovernmental Panel on Climate Change, said that we had 12 years to try and make some changes. There is no time for chaos and looking away from animal victims, we have to start doing something now.

The problem which comes with animal agriculture is very serious, though unfortunately both people and scientists tend to overlook it. It is very important not to forget about this predicament and try our best to help the situation and avoid getting to the point of no return.

Murder Hornets: A Threat to Life...