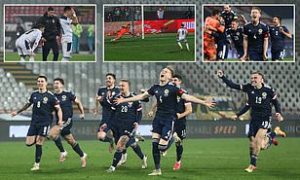 The men’s Scottish national team just qualified for the Euro 2020. Steve Clarke’s men are one of 20 clubs to qualify for the European Championship 2020. The play-off final against Serbia will go down in Scottish sporting history, this will be the first major tournament for the men’s team since 1998 (Mr Gale was twelve years old). On the 12th of November Scotland played against Serbia at the Red Star stadium, Serbia. Scotland took the lead on the 52’ minute when Ryan Christie scored. But at the 90’ minute Luka Jovic scored with a lucky header from a corner kick. (Luka Jovic was subbed in the 70 minute of the match). The match went to penalties with Scotland starting strong with the spot kick converted, but Serbia matched up. It was the last round, sudden death and Kenny Mclean scored for Scotland and if Aleksander Mitrovic missed Scotland would win. And that is exactly what happened. D.Marshall (the Scotish goalkeeper) saved the shot from Aleksander Mitrovic and made it a Scottish victory. Scotland qualified for the UEFA Euro qualifiers!

But what happens now for the Scottish national team? It is a big year for Scottish football and with Steven Gerrard raising the bar with Rangers perhaps the national side can give us something to be proud of, too.