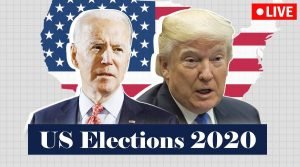 This year’s presidential election was between the current President Donald Trump and Obama’s Vice President Joe Biden. The vote counting started on November 3rd, 2020, and, for the first time, took 4 whole days to finish. On November 7th, 2020, the associated press told the world that Joe Biden was to become President in 2021. The reason the counting took so long was that people were allowed to send in their votes by mail due to COVID.

The presidential debate between Donald Trump and Joe Biden was all over the news. It had some very negative outtakes. The way Donald Trump was interrupting Biden was rude and disrespectful and it probably affected many people’s opinions.

President Donald Trump was extremely confident about his supposed victory in this year’s election, to the point that he spread false rumors about his win on social media, on November 7th, one hour before the press announced Biden’s victory, Donald Trump tweeted out: “I WON THIS ELECTION, BY A LOT!”. Twitter threatened to ban him but he continued posting about fake news and saying that the election was rigged.

The former vice president, Joe Biden, has been elected the 46th president of the United States of America. By his side will be Kamala Harris, the first-ever black, Indian woman in Office. Kamala Harris is a politician and attorney. She studied at UC Hastings College of the Law. She has since written several books and gained success and popularity among American citizens.

Joe Biden is an important politician in the American government, being former President Obama’s Vice President and President-elect for this year’s election. He will be inaugurated into office on January 20, 2021. He and Kamala Harris are both members of the Democratic party. MjHe represents the values of the Democrats but he wants to be the President for all, even those who didn’t vote for him. Biden has an idea, a vision, of a fair and better America. The main three things he plans to do are to beat Covid and take on its threats; to provide more jobs and make the recovery from Covid easier; and last, but certainly not least, to improve American healthcare and make it affordable to all.

Scotland at the Euros!