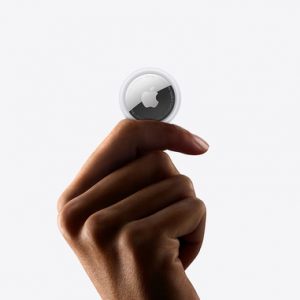 Apple AirTags are small bluetooth devices that help people keep track of their personal belongings such as keys, purses, wallets, bags, and so on, but some people are using this for mischievous ends in order to track down and locate others (including stalking). The device costs around 30 dollars and is really easy to use. You simply pair it with your phone and place it anywhere you want, and it tracks it down showing you where it is currently located.

There have been unwanted AirTags reported in people’s cars and belongings. They are about the size of a coin, which means they can fit almost anywhere, and they also have magnets inside them, allowing them to stick onto any metallic surface such as the inside of a car or vehicle. Just this month, there have been reports regarding Apple AirTags and people being tracked. One lady in Atlanta discovered an AirTag in her car’s gas tank. It took her weeks to get it out. The stalker knew every move she was making, as well as her address, workplace and routines.

There are some people who know that they are being tracked, but they just can’t find the tracker, making them feel vulnerable and helpless, and the worst part is that the AirTag has the battery life of a full year. Due to the size of the AirTag, it can fit into a thousand different places. Apple has created an app on Google Play for Android users which allows them to know whether or not they are being tracked with an AirTag, so everyone can maintain their privacy. New laws and regulations have been made to prevent further tracking, and Apple is helping the police track down the criminals. Cases have mostly been reported on luxury items, such as cars, luggage, and purses meaning that the tracker could steal these valuable items by knowing where they are located. If you are ever in a situation like this, report it to the police and Apple immediately, so they can help you. Right now, Apple is working on ways to prevent being tracked and being able to disable the tracking as a third-party user.

It is hoped this action from government officials and Apple will reduce and eventually eliminate further episodes.