In Year 7, students study the features of different types of writing, and then have a go at using these features themselves. This instils a better understanding of the varied texts they will be exposed to, increases their appreciation of the work of writers, and of course develops their own skills of expression. Before writing, we looked at examples of these common features, in both written articles and television travel articles. These examples included the following features, which we identified together: opening hooks, figurative language, modals,  hyperbole, facts, bathos, stacked adjectives, alliteration, puns, direct address, litotes, reflection.

After our preparation was complete, the class worked on creating their own mini travel magazines in groups, including their own articles on places they had visited. The example below, by Tommaso G., is an excellent example that incorporates all the features, and has a very pleasing style. It is proof of the standards that motivated students such as Tommaso can achieve, fruit of his hard work and care.

Paris is the most romantic place in the world. When I woke up in the Latin Quarter where I stayed on my trip, I was overwhelmed with the bluest sky in the world and the heavenly smell of fresh croissants and chocolate crepes. The Latin Quarter is significant in the history of France as the sight for several student-led revolutions. Latin was the language back in the Middle Ages as well.

When in Paris, visiting the Eiffel Tower is a must. It’s one of the most recognizable structures in the world and was the main exhibit in the 1889 World’s Fair. It was built to commemorate the 100th year of the French Revolution and to highlight France’s industrial power. The Eiffel Tower is now a romantic element of Paris, with its night time lights.

If you are a football fan visiting Paris, just like me, you should go to PSG’s stadium where I took a tour including the famous locker rooms. While in the locker rooms, I saw a short, stocky man in a PSG uniform with the number 30. Could it be ..?  No way! Number 30 is Messi’s number…

I took a mid-afternoon walk through the famous Tuileries, which is a quintessential Parisian park with sand and lots and fountains. The Tuileries is adjacent to the world famous Louvre Museum which is home to the Mona Lisa. The museum is housed in the Louvre Palace, originally constructed in the late 12th to 13th century under Philip II.

One of the last things I did in Paris was an evening boat trip down the River Seine, where I could view the gorgeous bridges of Paris and the many well-lit buildings and monuments. Paris is known as the City of Light but not because of the many lights you can see at night but because in 1667, King Louis XIV wanted a safer city. He ordered the police to place lanterns on the streets, and residents were asked to light their windows with candles and oil lamps. Louis thought this would reduce crime by making it more difficult for lawbreakers to hide from the police. 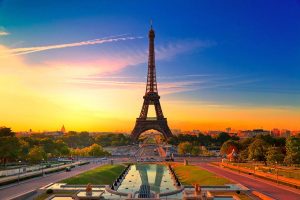 Paris is home to some of the most famous clothing designers in the world such as Hermes. I think Paris is the best and the worst place to shop.  It has great clothing shops but because they are so popular you often feel like you are stacked in a sardine can.

Eiffel in love with Paris at first sight. I think this is the place of my dreams. Everything I would like to do is possible in Paris. So in the end Paris isn’t bad at all.